The Mourne Wall was built between 1904 and 1922 to protect the catchment areas for the Silent Valley reservoirs that supply Belfast. Having such a large scale construction project here also helped improve the fortunes of many local people, who were suffering from mass unemployment at that time. It is a huge and impressive drystone wall: about 35 km long, 1.5 m high and 80 cm thick, making it wide enough to walk along the top. It passes on, or near to, the summits of 15 peaks, including the tallest 5 mountains in Northern Ireland, which are all over 700 m.

We recently completed the Mourne Wall Challenge: hiking beside the whole wall in a single loop. As well as a length of 35 km (23 mi) the walk has an ascent of 2440 m (8004 ft) and it can be done in a single (15 hour) day. Rather than doing this, we chose to break the trip into two sections so we could have the added excitement of a wild camp on the top of Slieve Meelmore. A two day trip gave us more time to stop and enjoy the views, but also added weight to our rucksacks, making long ascents more difficult.

The full list of hills and mountains that the wall crosses (in the order we completed them) are:

The tougher aspects of the challenge are not just the combined distance and ascent, but also the terrain and gradients of the Mourne Mountains themselves. In particular: Slieve Binnian, Slieve Muck, Slieve Bearnagh and Slieve Donard are all independently quite big, and each has a very steep ascent to complete before the summit. Also, as the wall generally sticks to mountain ridges, there are very few streams available to refill water containers, meaning that a lot of refreshment has to be carried. Keeping the weight of the packs low was a struggle and we had to slim down to just a bivvy and tarp for our wild camp. 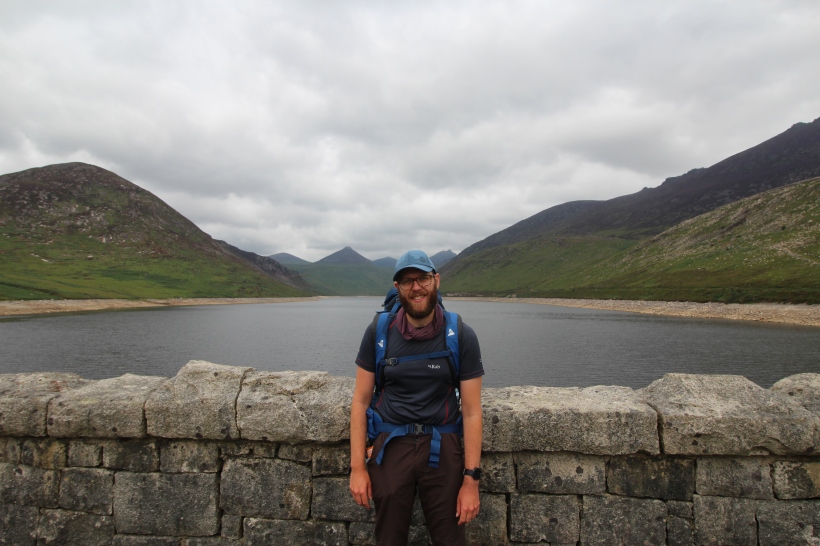 On the Saturday morning we began with a tasty cooked breakfast in Rostrevor to stock up on calories and energy before starting out. As we sat, drinking coffee in the comfort of a cosy cafe, I don’t think I quite realised how difficult the next 30 hours were going to be. From Rostrevor, we drove to our planned starting point at Carrick Little. We had picked this location as it meant that a lot of the hardest parts of the walk would be completed first and we set off at 10.30 am to give ourselves time to reach the camping spot just before dark.

There is no easing into the Mourne Wall Challenge and from Carrick Little the wall immediately heads up and over Slieve Binnian (747 m). The ascent was hard going but it was the descent that posed the first real challenge of the day. This is one of the steepest sections of the wall, crossing summit tors and lengthy slabs, and the scramble down seemed to take a frustratingly long time. Once down, we skirted around the summit of Wee Binnian (460 m) before crossing Moolieve (332 m) to arrive at the Silent Valley reservoir. It took us about 3 hours to do this small 6 km section and it felt like we had barely moved.

After the physical challenge of the Binnians we now had to face the mental challenge of being back in the valley and effectively having to start out all over again. Buying ice creams helped and the local cafe also refilled our water bottles. The next summit (Slievenaglough, 445 m) was a bit steep and boggy but, reaching the top at about 3.30 pm, we were finally half way to our planned campsite. We stopped to cook a late lunch and brew a tea in order to build our strength and resolve back up, ready for the next 10 km.

From here the wall dropped (yet again) into another valley and the subsequent climb to the top of Slieve Muck (674 m) looked very intimidating. We met another duo doing the same walk and, for them, this was a twist too far. They admitted to having second thoughts and, as we didn’t see them again, they probably turned back here. It is not for nothing that this section has the reputation of being, mentally, the toughest part of the route.

Once we began climbing though, it wasn’t actually too bad, and when the first ascent was over we found ourselves on a much easier undulating ridge. We quickly crossed Carn Mountain (587 m), Slieve Loughshannagh (619 m) and Slieve Meelbeg (708 m) before stopping for another meal in a col before Slieve Meelmore (684m). After a final push to the top, it was approaching 8.30 pm, and we were ready to set up camp. This point was over half way round and we had completed 20 km and climbed 1620 m in the previous 10 hours.

The wall gave us good protection from the rising wind and we tied our tarp to the capstones on top, giving us a shelter to sleep underneath. A mist arrived as we got into our bivvies and we slowly fell asleep surrounded by a milky blackness. The mist was still around in the morning and it was initially disorientating and a little bit scary to wake up outside, unable to see where we were. Thankfully though, we had managed a reasonably good night’s sleep and felt refreshed enough to look forward to the day ahead. 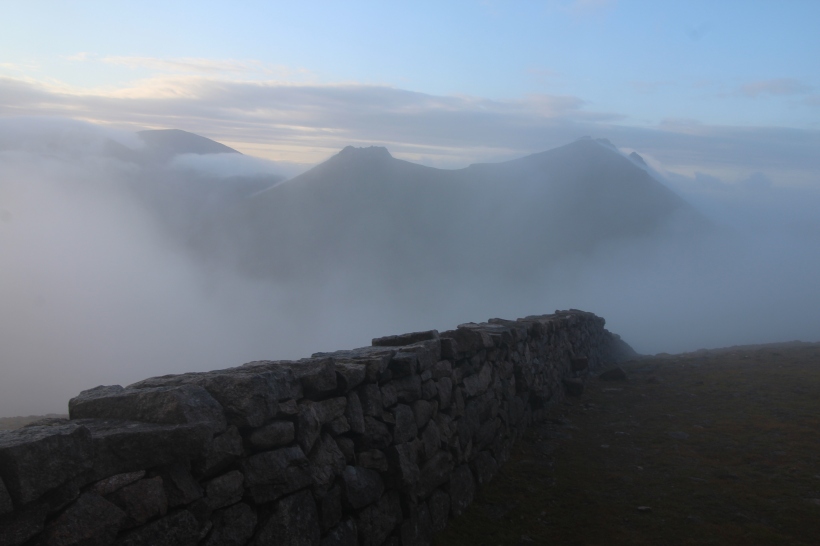 We brewed tea and ate breakfast and, by the time we were packed and ready to leave, the clouds had cleared and we could see the way ahead. We were running very low on water by this point, but we knew from prior experience that there was a relatively large stream in the valley where we would be able to fill up our bottles. Although it was a relief to have our supply replenished, it came with a price: 3 kg extra weight to carry up the next ascent! Crossing Slieve Bearnagh (727 m) was the next objective, which meant a long and steep climb followed by yet another descent back into a valley. By this point we were so used to going up and down that we were no longer too disheartened by the prospect.

The big push to the top of Slieve Bearnagh required some pain killers to complete on aching feet and legs. The rocks and grass were slippery in the morning dew, but the fresh air and quiet of the surroundings made it feel peaceful, at least until we were out of breath and huffing like steam trains! It was a small and fun detour (with a bit of scrambling) to actually get onto the summit proper, but doing so gave us a good view of what was to come. Next up was a steady and more straightforward ascent up and along a ridge crossing Slievenaglogh (586 m) and Slieve Corragh 691 m (2,267 ft) before heading towards the finale: the two biggest mountains in Northern Ireland.

Walking a long distance so close to the wall gave us a good appreciation for the wildlife that lives in and around it. We spotted lizards, mice, and birds such as wheatears, meadow pipits, stone chats and ravens. We even came across, rather bizarrely, a lost-looking racing pigeon with a numbered rings. The bell heather and gorse were in full bloom and the mountains had a lovely purple and yellow carpet of flowers on them, enticing numerous insects out to feed. The gentle hum of bees arose whenever the sun shone, and we spotted a lot of butterflies including whites, yellows, orange tips, gatekeepers and browns. 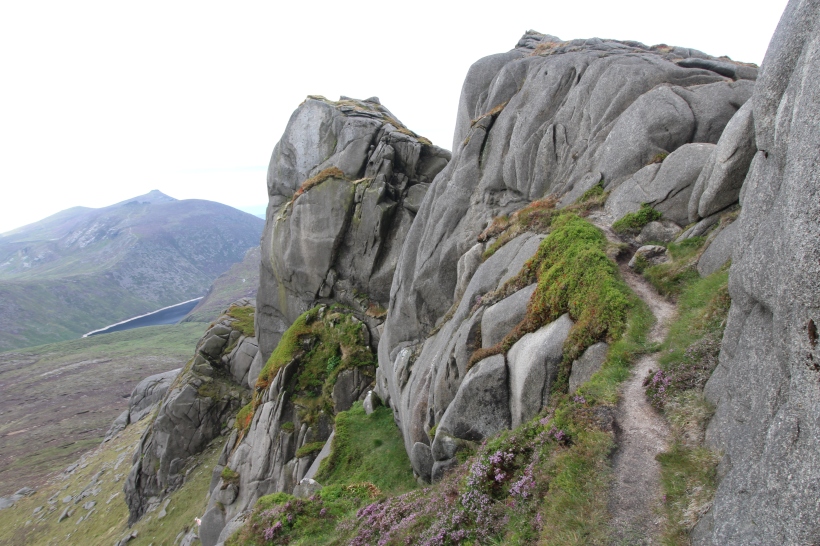 We found completing the final two mountains, Slieve Commedagh 765 m (2,510 ft) and Slieve Donard 850 m (2,790 ft), very difficult on tired legs and it was a case of mind over matter to get to the tops. Whenever I struggled I thought about how difficult it must have been to actually construct the wall itself, 95 years ago. The workers would have had to carry and build with huge rocks on the steep mountain sides, working in all sorts of extreme conditions and in remote places. They were very hardy people and I have a lot of respect for what they achieved, especially after walking the wall’s length.

It was cloudy when we finally topped out onto Slieve Donard, but the views from the previous 12 peaks had been so wonderful that we weren’t too upset. We were just relieved that we had made it up the final ascent were now on the home straight. Standing on the highest point in Northern Ireland it felt like we were close to completing our challenge, but we actually had another 6 km to go, and it was a long and miserable slog down and around Rocky Mountain (525 m) and back to the car. It took us 8.5 hours to complete the second day and we covered 15 km and ascended 820 m.

When, at the last minute, we decided to do this challenge, I probably underestimated its difficulties. It is one of the hardest hikes that I have done, but it was worth the effort and the satisfaction of completing it more than made up for the occasional pain and discomfort. I found doing a long distance hike in a familiar place really helped me to gain a new perspective of the area, and I am now much better at picturing how the different places link together. It was especially fun being able to camp out, and waking up on top of a mountain in the middle of Northern Ireland is one of the most exciting moments of the year so far.